admin
Admin
posted on 4 years ago — updated on 11 months ago
2,043
views
There is way too much night crime happening, in the light of the moon!

I was in an emergency room in a large city in central Ohio late one evening for personal reasons! While there, several ambulances brought in a few young men that had been shot during a gang fight. Soon following was several of the associates of those who were brought in for treatment! Unfortunately, one of the young men that was shot lost both of his legs because of injuries sustained that could not be helped.

Sitting there watching this all unfold, right in front of all those waiting their turn for treatment for whatever reason they happened to be there this particular night: we witnessed several of the other affiliated associates leaning against walls crying and carrying on about the things that had transpired that evening. They were portraying a show of emotion about the fact that someone they knew that evening,  was in a bad way with injuries, instead of portraying hard tough emotion when face-to-face with rival fellow men!

Everyone is human, even ones who are caught up in group friendships that for whatever reason, rival against other groups on the streets. Unfortunately way to many of our young ones get caught up in this situation in life, for whatever reason they get pulled into it! Fortunately though, there are many who have realized that this lifestyle 'only'  ends up in disaster, heartache, and possibly death - too soon in life; and have walked away from this situation, and worked towards regrouping their lives for the better!

It's absolutely such a shame that anyone gets caught up in this, regardless of age, gender, or nationality. All anyone can do is hope that those who wish to can escape from this and seek help from ones who are there to help them regroup and guide and direct them back to a stable life!

One and all: be there for one-and-all! 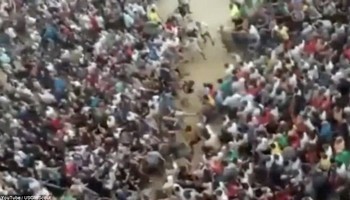